52: When I woke up, the weather was still dismal. Upon entering the cafe for breakfast, the ladies asked incredulously if I was going to ride in this. As I cruised through my Yukon Platter 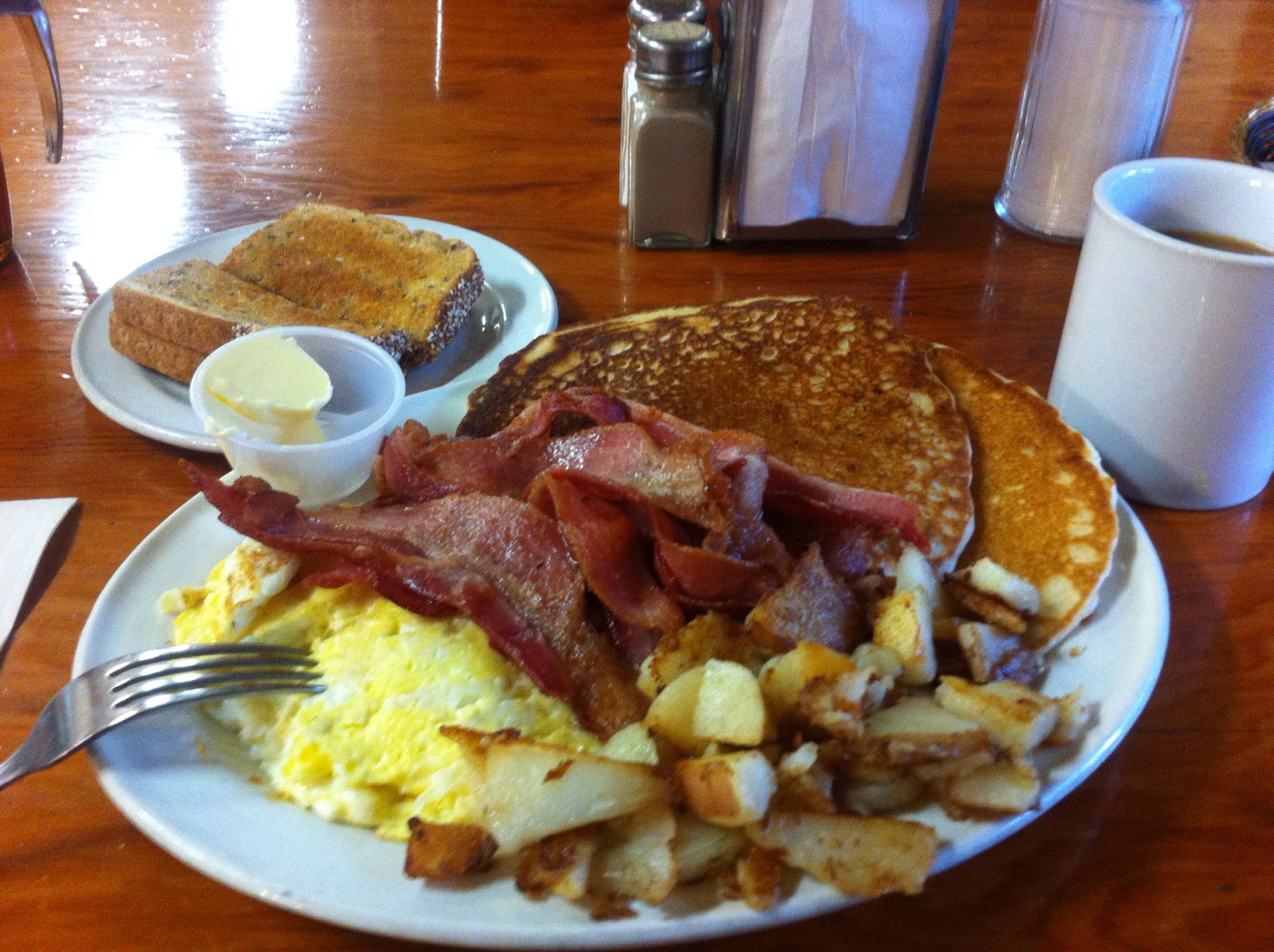 (3 eggs, 6 bacons, 2 pancakes, 2 toasts and hash browns…and this very hungry caterpillar could have eaten more) I made up my mind to find a ride to Whitehorse. I finished eating, packed up my things, and parked my bike in the rain in front of the cafe with a dripping paper reading “Whitehorse.”
After chatting with many Eastbound folks, finally Blair and Candace, a retired couple from Victoria, offered a ride if I could figure out how to get my bike into their RV. It wasn’t too much Tetris, more an art of not letting the filthy bike get the interior too dirty.
The three hours to town were peaceful- the RV rattled too much to carry out a conversation from the back. After giving up on writing in my journal (due to the bouncing of the RV) and reading (making me slightly carsick) I put my head down on the table and napped.
Somewhere along the line it stopped raining and the road was dry. Blair had turned off the windshield wipers. I started feeling some guilt about being in a motorized vehicle and not on my bike. It still looked threatening in spots, and the forecast was for pm thunderstorms. When we stopped briefly in Teslin, my body asked to NOT get back on my bicycle. Instead I consumed the largest cinnamon bun I have ever seen and got back in the RV. Not 3 minutes down the road, it was raining again, then sun, then rain again… As the weather flip-flopped I toyed with my conceptualizations of guilt and regret and determined that this is MY trip, and if I’m feeling done with my bike for a while then that’s fine. I set out wth an arbitrary goal (Anchorage) which just as easily could have been Haines or Calgary or Missoula. If I’d intended to ride to the end of the road, I could have gone to Deadhorse/Prudhoe Bay – where so many of the southbounders have started en route to Tierra Del Fuego. But I didn’t set out on this trip to get somewhere, I set out on this trip to learn something about myself. I’ve said it before and to many folks I’ve met: if I was just trying to get to Anchorage, it would have been easier and cheaper to fly. To learn enough to put my pride on the shelf, change plans when it makes sense, and have an adventure whose value is independent of reaching an arbitrary goal, is far more important than reaching the destination. Hopefully in a few weeks I will have more regret that I didn’t spend the evening in Jade City hanging out with the cute blond vegetarian miner I met than I will about skipping out on these 250 miles.
Blair and Candace stopped at an RV park just out of town, so I got my 6 miles of headwinds and light rain for the day as I rode to the Roots’ house (old friends of my mom). Their home is warm and cozy – rich wood tones, overflowing bookshelves, mason jars full of different grains and an eclectic assortment of pottery adorning the kitchen. I felt instantly at home. Along with Charlie and his wife MaryAnn and their kids (my age) Logan and Galena, Charlie’s mom, June, is in town, as is his friend Mike –so it was a full house. MaryAnn had also just returned home from a trip to Europe- I certainly picked a busy time to drop in early! Despite the chaos, we sat down for a lovely afternoon tea on the porch before going out to dinner.

53: Mike had to go down to Atlin, a beautiful historic gold rush town and lake about two hours drive into BC for a quick work visit to a seismological GPS unit and invited me to go with him. I’d been told of Atlin’s beauty and eagerly accepted. The drive down was lovely – despite yesterday’s rain and miles upon miles of rolling hills and pines, I’ve become quite enamored with the raw wild of the Yukon. It’s mountains (at least the ones I’ve seen so far) are far less dramatic than the Canadian Rockies, but they are so remote and untouched.
Though Atlin is actually in BC, it is only accessed through the Yukon. It was a beautiful jaunt back in to the Cassiar mountains. As Mike did his work things, I wandered around town eating pastries (local bakeries abound In the north the way coffee shops do in Portland) and watched as the historical society moved an old boat to a concrete pad for restoration and display.

We drove back via Carcross, a community with a history as a transportation hub during the gold rush. Unfortunately it began raining, with low clouds blocking the view of the mountain pass towards Skagway.
When we returned to Whitehorse, MaryAnn prepared a marvelous feast of salmon, salads and a barley pilaf, followed by blueberry cobbler and ice cream, and bed.

54: After a lovely sleep in, and with numerous cups of coffee, I spent my morning planning the next legs of my trip. There has been a major change of plans: I have officially decided to turn my trip in to a circle route. Instead of bee-lining it for Anchorage through bad road construction, and remote, uninteresting scenery just to fly home, I will get as far North/west as Haines Junction, YT and then head south to Haines, AK. The Haines road is claimed to be the most scenic paved road in North America, and Haines itself is as true-Alaska as it gets. From Haines I will take the ferry south through the Inside Passage, with short stops in Juneau and Prince Rupert, and   a week on the islands of Haida Gwaii, before arriving at the North end of Vancouver Island. From there I will ride down to Portland, and depending on how I’m feeling, take the Amtrak home (though plans could change again).
With the first ferry ticket booked and stress of the decision making process lifted (what feels right vs what I said I was going to do), I rode the mile into downtown Whitehorse. While my bike was at the shop ( time for new der. cable) I walked around and stopped in at the numerous vibrant Art galleries, the summer music in the park series featuring young local talent, and the SS Klondike river stern wheeler steamship Historic site/museum. While walking around, my legs cramped up fiercely, to a point where I had to sit down several times, wincing and biting my tongue, and stop twice on my early return to the house. I was very surprised – MaryAnn had loaded me up on exceptionally healthy food in these three days off my bike. My best explanation was sodium deficiency and dehydration from drinking lots of tea and coffee on my rest days instead of my typical water and Gatorade. I made myself grilled cheese sandwiches and tomato soup with extra salt, drank 2 cups of Gatorade, and took a nap, after which my muscles felt much more functional. Just goes to show that fresh fruits and veggies, whole grains, nuts, and wild salmon sometimes need to be balanced by junk food?
We ate last night’s delicious (andhealthy) leftovers for dinner, and then Galena and I made chocolate chip cookies before bed. I had really missed baking (and cooking in a real kitchen, for that matter)!