About the Colorado Nepal Alliance

The Colorado Nepal Alliance is a small nonprofit based in Denver, CO, focused on enhancing the lives of those living in rural Nepal.

During a trip to Nepal in 2003, Anne Hines watched with concern as an elderly porter carried a 65 Kg load up a steep and rocky trail in the Annapurna region, wearing flip flops that were about to break. Back home in Denver, that moment became a frequent topic of conversation between Anne and her husband Larry Leszczynski. “We saw a need, and thought we might be able to help, even if in a small way,” explains Hines. When they returned to Nepal they brought bags full of footwear to distribute to porters they encountered, gathered mostly by friends in the Denver area. In the years since, the “Shoes for Sherpas” initiative has grown tremendously, and so has the connection between communities in Colorado and Nepal. At its core, the Colorado Nepal Alliance is all about helping groups in Colorado– from high school classrooms to run clubs– identify and meet the needs of communities in rural Nepal.

As the organization’s relationships with the people of rural Nepal have deepened over time and repeated visits, so has their understanding of the villagers’ particular needs. As a result, 2014 saw a major expansion of the organization’s efforts, including a community health survey, school construction, school uniforms, and much more. Learn more about the Colorado Nepal Alliance below, and don’t miss our dispatches from the field.

We think the best way to get to know us is to take a look at what we’ve already accomplished: 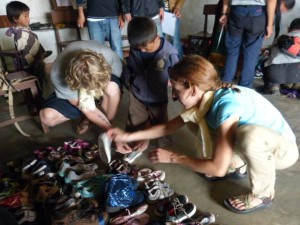 Providing “used but still usable” footwear to Nepali porters and villagers. To date, we have collected, inspected, transported, and fit 2,700 pairs of shoes to Nepal through our Shoes for Sherpas program.

The Sherpas are an ethnic group living primarily in the mountainous regions of eastern Nepal, and many make their living as porters in the tourism trade as well as in the day-to-day transport of goods from village to village.   Since quality footwear is often either unavailable or unaffordable, our goal is to provide as much “used but still usable” footwear as possible to those living in the region.

Shoes for Sherpas is a project of the Colorado Nepal Alliance. 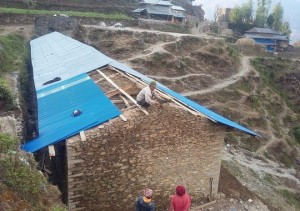 As of early April 2015 building the roof on a new classroom in the village of Kuri in the Darkha area was underway, and plans were made to pour the concrete floor soon thereafter. Prior to the April 25th earthquake, the expected completion date was Spring of 2015.

Since the fall of 2014 we have been working to build an additional classroom for a school in Kuri.

The Colorado Nepal Alliance provided school uniforms to students at the Shree Chandra Devi Primary school in Darkha. (In Nepal, uniforms are compulsory for school attendance.) 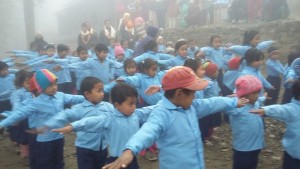 Children in their new uniforms, ready to learn.

As of April 25th, 2015 we are shifting all of our fundraising efforts to disaster relief. As we are not able to provide immediate relief, all money we collect will go toward long-term recovery efforts in  rural Nepal, helping families in the Darkha region and beyond rebuild in the coming months.

Code Embed: Cannot use CODE_relief as a global code as it is being used to store 2 unique pieces of code in 2 posts