In October 2012, Shoes for Sherpas distributed athletic shoes, children’s shoes, and hiking boots to porters and residents in the Everest region of Nepal. Some shoes and boots were passed out along the trail, while others were distributed at a one day event in Lukla, where an estimated 200+ people gathered. 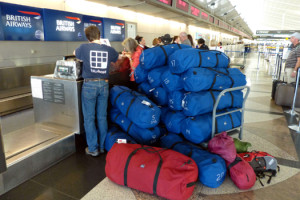 We were assisted in our efforts by Gopal Tamang, Gyanendra Rai, and Ming Ma Sherpa, who helped identify porters and villagers who had a true need for footwear. Thanks also to our fellow guest house residents at The Nest for assisting with fitting and distribution of the shoes at the Lukla event, and to The Nest for allowing us to hold the event on their premises.

We couldn’t have had this successful distribution without the participation of our donors; those who gave money to pay for shipping, and those who donated footwear. Thank you so much for your generosity, your generosity has touched many hearts.

Special thanks goes to:

The fine folks at the Denver location of Runners Roost Colorado have provided a drop-off site, donated many pairs of barely-used running and trail shoes, and have let us use their community room on several occasions.

Rajan Simkhada is President of Kathmandu-based Earthbound Expeditions (P.) LTD., a Himalayan adventure travel and trekking company.   Rajan is our main resource within Nepal for coordinating shipping, travel, and distribution.

U Pump It Gas Station