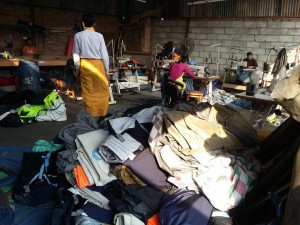 Shelters being sewn in Kathmandu

The Colorado Nepal Alliance has been hard at work providing emergency supplies to the the villagers in Darkha, Nepal, and we can report that a preliminary shipment of emergency shelters has reached Dhading.

The weather in the Dhading District of Nepal has been cold and wet, with temperatures dropping well below fifty degrees Fahrenheit at night. Most of the village’s homes were destroyed by the quake. Fearing aftershocks and structural instability, people are understandably wary of sleeping near collapse-prone structures that still stand. They need protection from the elements, and they don’t have time to wait for an already overtaxed government relief effort to respond. 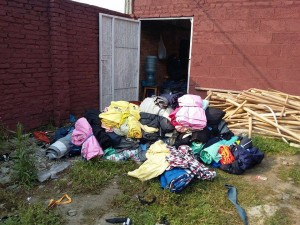 Because appropriate materials are in such short supply, it any color of fabric that can be found is being used!

Tents and tarps for temporary shelter have been very hard to come by due to the overwhelming number of people affected by the April 25th earthquake and the dispersion of the population over a wide, rugged area. Time was of the essence and resources scarce, but thanks to your donations to the Darkha Disaster Relief Fund, we were able to make arrangements with a business in Kathmandu to rapidly produce emergency shelters out of suitable materials already at hand.

This morning we received an update from our Project Coordinator, Gopal Tamang, who has made it to Dhading with the first batch of 100 tents. Because many roads and paths were rendered impassable by the earthquake last week, the tents had to be carried uphill from Dhading to Darkha, a journey that takes several hours even in good conditions.

Gopal reports that he met with a government official in Dhading, who gratefully sanctioned our distributions of food and shelter, and he expressed his desire to be regularly briefed about our continuing efforts. Gopal also conveyed to us that the people of Darkha are very grateful for the assistance they have received due to your donations.

The safety of our partners on the ground in Nepal continues to be a concern. We’ve had to alter our tactics for this second effort at targeted distribution of aid. Gopal says that he has to be very careful about conspicuously transporting supplies, after news reached him from other villages that some attempts to distribute provisions were overrun by internally displaced persons desperate for aid. The decision was made to distribute the tents family-by-family with the assistance of a Dhading government official.

We don’t have the resources of the Red Cross or the manpower of the Marines. But we’re getting big results, one family at a time. Please help us in our efforts to meet the basic needs of the people of Darkha.